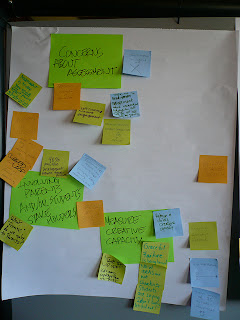 The first full day of the Big Ideas Fest in Half Moon Bay included a "Rapid Fire" presentation by Barbara Chow (Education Program Director at Hewlett Foundation). Barbara talked about the importance of Federal policy and new school models.

William Ayres (noted educational activist) talked how the national "disrespect" for teachers is damaging the profession. His simple belief is "Good working conditions are good teaching conditions, and good teaching conditions are good learning conditions." He is concerned that some for-profit providers turn education into a product assembly line filling "inert heads with disconnected facts."
Enrique Legaspi, a young teacher, showed how he is enabling students to "curate" their own content on the web. He feels that "editors learn - so we should let students edit their own materials rather than doing it for them."

The need for "real time assessment" was also discussed. Students need (and deserve) to get "the right data at the right time." People were talking about "Course Signals" - a tool that gives a student a green, yellow or red light to indicate their chances of passing a course. The signal is based on the passing rate of past students who have performed similarly up to the same point in the course. Apparently the simple signal greatly improves the pass rate because students who get a red or yellow warning take action before it is too late.

The Ford Fusion dashboard was provided as an example of real time feedback. A green plant is shown on the dashboard. It gets greener if the car is driven in an eco-friendly way, and shrivels if the car is not driven responsibly. Apparently this real time feedback has greatly improved the driving performance of Fusion owners. The symbol was developed by IDEO using the same "Action Collab" process we are using at the conference.

The first full day of my Action Collab went well. My group included educators from around the nation, creative people from Edutopia, and more. We worked on an assessment tool that measures 21st century skills (such as teamwork) and would work with the Common Core Standards. One of the special "research subjects" who was interviewed by my team was Gever Tulley a former Adobe designer and friend of mine who recently started a charter school (Brightworks) focused on tinkering. He also wrote a book called "50 Dangerous Things You Should Let Your Children Do."

To spark creative thinking, I led my group through five different ‘Improv’ activities - something I never imagined doing but find very effective now that I have gotten training from the pros on how to do it. Improv, it turns out, is not about being funny. It is about being "present" and connecting with people in new ways.

I am all set for tomorrow's "proto-storming" session in the Collab. We will be using RAFT materials to create a physical model of our assessment system. Time for lights out!

March 23, 2012
3D Tessellation model A bespectacled 6th grader enthusiastically explains ‘efficiency of 3D space tessellations’ with myriad equations and handmade tessellation patterns to address the needs of the packaging, storing, shipping and construction industry. Another middle school student, was inspired by his little brother’s telescope and built a simple vacuum chamber using a PVC pipe with a microphone and a speaker on both ends to find out how sound travels on Mars! This 8th grader from Granada Islamic School used an oscilloscope his mother found at an auction to measure the sounds. “I poke around and find junk to build my projects. It’s fun.” Science projects today have become fun for many students as they use more hands on activities to experiment and understand concepts. These two middle school students were among 996 participants at the recent Synopsys Silicon Valley Science and Technology Championship , where RAFT was one of the special judges. Moenes Iskarous, President, S
54 comments
Read more

April 20, 2018
“The cultivation of flowers and trees is the cultivation of the good, the beautiful and the ennobling in man, and for one, I wish to see this culture become universal.” Those words, from J. Sterling Morton, the founder of Arbor Day, got me thinking about how caring for trees and respecting all living things greatly impact future generations. National Arbor Day (held this year on April 27th) is an annual observance celebrating the role of trees in our lives and promoting tree planting and care. This holiday was first observed in 1872, in Nebraska, but tree planting festivals are as old as civilization. Trees have appeared throughout history as the symbol of life and hope. As teachers, we can encourage students to appreciate trees, nature, and all living things for future generations to enjoy! Here are a few STEAM (Science, Technology, Engineering, Arts, and Math) ideas to help you spread agricultural information and enthusiasm for trees on Arbor Day with your students: SCIE
1 comment
Read more

February 29, 2012
Come meet RAFT ’s Math Activity Developer, Jeanne Lazzarini, at RAFT San Jose who has a treasure chest of Pi-Day activities to share!  Not only will she be dressed as a Pirate (because Pi rates!), she’ll also offer you delicious pie to eat while showing you great Pi-Day Math activities to make and take, to use in your classroom to celebrate Pi day! The Pi-Day activities include RAFT Math Idea Sheet activities like Finding Pi , Wearable Pi and Pi Day Pin . Irrational number Pi, also written as π, is the ratio of the circumference of a circle to its diameter, and is celebrated all over the world on March 14th because π is a number that begins as 3.14!  With the use of computers, Pi has been calculated trillions of digits past the decimal point! Pi is an irrational and transcendental number, and its digits continue infinitely without any repeating patterns of digits!  Pi has been used in many applications for over 4000 years! π rate activity days at RAFT! Join us at RAFT, San Jose
Post a Comment
Read more